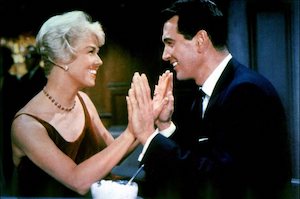 The ability for the film industry to depict sexual, romantic relationships on screen depended on a very important censorship code known as the Motion Picture Production Code of 1934. The code was a guide for what was acceptable and unacceptable content for films. Some themes that were banned by the code were: “adultery”, “sex perversion”, “scenes of passion”, or “profanity”. The code became less enforced by the 1960s, but didn’t entirely disappear until the arrival of the rating system in 1968.

Pillow Talk (1959) and Design for Living (1933) serve as both pre-code and post-code depictions of relationships on screen. Pillow Talk (1959) stars on-screen team Doris Day and Rock Hudson. The film exemplifies the enforcement of the code in that it tamely depicts the sexual relationship between the two characters as lighthearted. There are no frank discussions of sex and farcical phrases such as “bedroom problems” are used to describe trysts. The film’s depiction of sex is tame compared to Design for Living (1933), which went against the code due to its use of innuendos and its blunt discussion of sex (the word is actually used in the film!) The narrative involves the theme of a ménage-à-trois relationship, which ultimately led to the film being banned in 1934. In comparison to Pillow Talk, the film has a far more modern view towards relationships, but both are incredibly entertaining comedies that will be delightful on 35mm.