We are giving away a pair of tickets to A Bowie Celebration: Bowie Alumni Play Diamond Dogs & Ziggy Stardust @ Crystal Ballroom on March 11. To win, comment on this post why you’d like to attend. Winner will be drawn and emailed March 6. 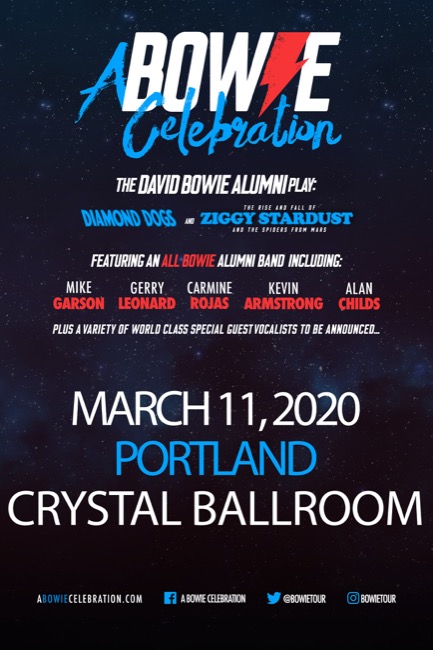 Join key alumni musicians of David Bowie’s bands from across the decades, anchored by his longest standing member Mike Garson, for an unforgettable and critically acclaimed evening of Bowie songs featuring world class vocalists as they play two of the greatest albums of all time – Diamond Dogs and Ziggy Stardust – in their entirety.

Mike Garson was on numerous Bowie albums, including his much talked about masterly solo on the “Aladdin Sane” track. Garson was Bowie’s longest and most frequent band member. They performed together for both David’s first and last concerts in the United States as well as 1,000 concerts around the globe in between.

On Garson, Bowie said “It is pointless to talk about his ability as a pianist. He is exceptional. However, there are very, very few musicians, let alone pianists, who naturally understand the movement and free thinking necessary to hurl themselves into experimental or traditional areas of music, sometimes, ironically, at the same time. Mike does this with such enthusiasm that it makes my heart glad just to be in the same room with him.”

Gerry Leonard
Gerry Leonard was music director and guitar player for David Bowie on his “Reality” world tour and DVD along with Bowie’s previous two records, Heathen and Reality and their subsequent tours along with his The Next Day album. Further credits include recording and touring as guitar player and music director for artists such as Suzanne Vegas, Rufus Wainwright, Laurie Anderson, Duncan Sheik and Roger Waters. Leonard remarks, “I am super excited to be continuing to bring David’s music to his loyal fans with A Bowie Celebration. The combination of having his real band playing his music for his dedicated fans makes for a truly special night every time. It’s such a wonderful way to keep David’s memory and musical legacy alive.”

Kevin Armstrong
Kevin Armstrong first met Bowie in 1985 on sessions for “Absolute Beginners” after which he helped David put the band together and play for his Live Aid performance followed by recording the Bowie / Jagger song “Dancing in the Street” together. Kevin played on Bowie’s first Tin Machine album and tour and wrote and played on the Outside album with Bowie who introduced him to Iggy Pop and was featured on their Blah Blah Blah album. Kevin continues to play with Iggy Pop today. Armstrong says, “It’s a great honor to join Mike Garson and my Bowie brothers to help bring David Bowie’s amazing legacy to new audiences.”

Alan Childs
Alan Childs was Bowie’s drummer on his 1987 Glass Spider world tour and is featured on the tour album and DVD. Alan has also played with the likes of Julian Lennon, Rod Stewart, John Waite and many others. Alan plays all instruments and sings on his solo album and EP Alan Childs Aftermath. Alan says, “I am totally psyched to be joining A Bowie Celebration! What a great band of Bowie alumni with a mission is to keep David’s music alive in a concert setting for all the fans!”

Corey Glover is a founding member of Living Colour and has helped prove that not only could black guys kick out the jams, but that they could be embraced by a vast expanse of fans. Living Colour earned numerous industry awards including back-to-back Grammys for “Best Hard Rock Performance” and emerged as one of the most influential rock acts of all time: regularly selling out arenas and selling millions of albums. On touring with A Bowie Celebration, Glover says, “I am so looking forward to returning to the Bowie alum, jamming and sharing the music of Bowie with the world – the most brilliant thought provoking music ever conceived!”

Joe Sumner is a singer-songwriter and bassist for the rock band Fiction Plane. Sumner, a native of England, learned to play guitar and drums when he was a teenager, and was inspired to write songs when he heard Nirvana’s album Nevermind. An accomplished musician and singer, in 2017, Sumner toured with Sting on the massively successful 57th and ninth world tour. On A Bowie Celebration, Sumner says “This band of Bowie alumni is full of people that David himself trusted to bring his visions to life. Now they’re the perfect stewards to keep his spirit alive and it’s such an honor to be part of it.”

Sass Jordan has received a Canadian Juno Award, Billboard’s Best Female Rock Vocalist award and was a judge on the hit Canadian Idol television program. Sass starred in the Off-Broadway production of “Love, Janis” and has worked with Aerosmith, The Rolling Stones, AC/DC, Steve Miller Band, Van Halen, The Foo Fighters, Cheap Trick, Santana, Joe Cocker, Styx, Rodger Hodgson, April Wine, Jeff Healy and countless others. Sass says, “I am extremely honored to be part of a show that celebrates the astonishing legacy of one of my ultimate idols, David Bowie, as well as getting to play with some of the master musicians from his bands. Bowie is one of the reasons I wanted to be a performer, and doing this tour is like playing a love letter to his memory every night!”