We are giving away 2 pairs of tickets to 311 @ Crystal Ballroom on March 5. To win, comment on this post why you’d like to attend. Winner will be drawn and emailed March 2. 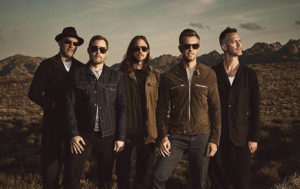 311 mix rock, rap, reggae and funk into their own unique hybrid sound – and have developed a reputation as one of the most entertaining and dynamic live bands in the U.S.

311 have previously released twelve studio albums, two greatest hits albums, two live albums, three DVDs and a boxed-set and have sold over nine million copies in the U.S. Their last ten albums reached the Top 10 on Billboard’s Top 200 Sales Chart and nine of their singles have reached the Top 10 on Billboard’s Alternative Radio Chart (including three #1 singles: “Down,” “Love Song” and “Don’t Tread On Me,” along with “Amber,” “All Mixed Up,” “Come Original,” “Creatures For Awhile,” “Hey You” and “Sunset in July”).