We are giving away a pair of tickets to World’s Finest @ Aladdin Theater on December 20. To win, comment on this post why you’d like to attend. Winner will be drawn and emailed December 16. 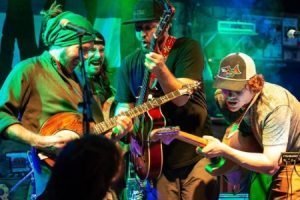 World’s Finest is a five piece band from Portland, OR who have branded themselves as Dance Floor Instigators. Since their inception as an acoustic trio in 2011, the band has gained members, added amplifiers, and have grown into a touring force on the West Coast festival scene and beyond.

With a songwriting style rooted in Americana, World’s Finest banks on their ability to transcend genres of all kinds. String-centric and bluegrass-inspired compositions seamlessly transition into funk, dub and trance soundscapes, leaving their audience with a full circle experience of emotion and dance. Their appreciation for punk and ska can be found peppered throughout their shows and albums, made evident by up-tempo, high-energy offerings.

SWATKINS AND THE POSITIVE AGENDA
Swatkins is a joyful prophet of positivity. Together with his band, The Positive Agenda, he plays feel-good funk made by and for real human beings. Steve Swatkins is part of the new generation of performers making raw, fresh soulful music without relying on computers or backing tracks. This multi-instrumentalist is a master of the talkbox, an old-school analog effect using his larynx to shape the sound of his keyboard synthesizer sent through a vinyl tube. Think of the funky robot voice from “California Love” or the hair-raising harmony intro to “24 Karat Magic.” Now picture a throwback dance party with a killer live band playing the deepest grooves imaginable, and you’ve got a taste of what The Positive Agenda is all about.

Swatkins has long been a fixture on the touring scene in his capacity as a sideman and guest artist. As a fulltime member of Excellent Gentlemen and Juno What?! he’s spread his irresistible signature style on stages across the US and Canada. Since joining Allen Stone’s band in 2013, he’s been around the world several times, becoming an indispensable part of the live show and co-writing several of Allen’s songs, including the lead single “Upside” from Stone’s last album Radius and also the lead single “Brown Eyed Lover” from the yet-unreleased next record. Most recently, he’s guest-starred with Brooklyn’s Turkuaz at their debut Red Rocks performance, sat in with Vulfpeck at their biggest NYC show to date in Central Park, and has toured subbing on keyboards with modern funk legends Lettuce. Now with Steve’s new original project, The Positive Agenda, his dedicated fans can see the Swatkins they know and love in a brand new setting, bringing high-energy performances to dancefloors everywhere.