We are giving away a pair of tickets to Governor’s Ball w/ Patrick Lamb @ The Sentinel Hotel on December 31. To win, comment on this post why you’d like to attend. Winner will be drawn and emailed December 30. 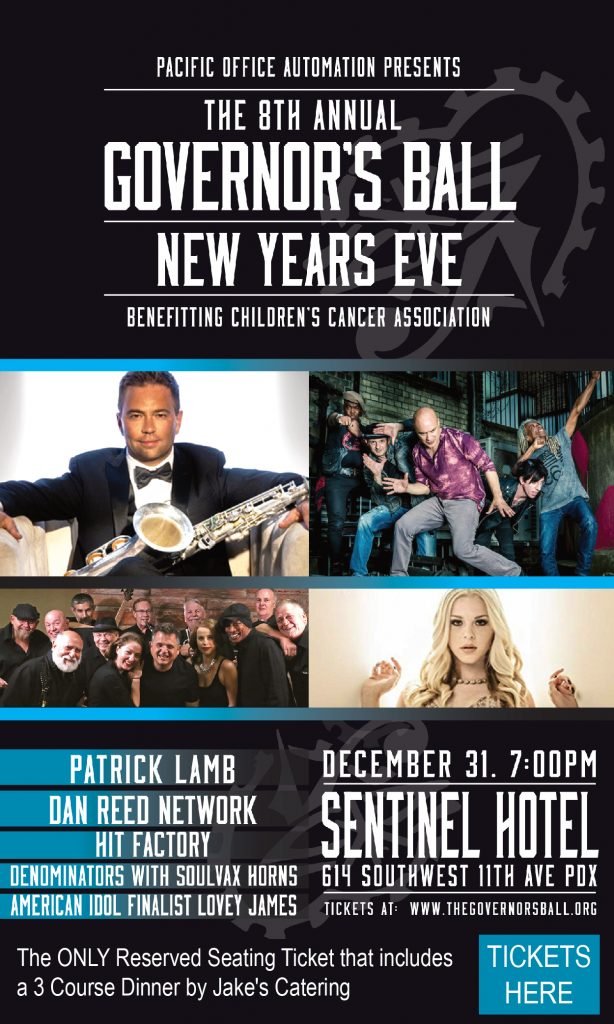 The Governor’s Ball came to fruition to fufill a need for a more high end and discerning premiere clientele. With its vaulted ceilings experience the most beautiful hotel in the city with a 3 course dinner by Jakes included with every reserved ticket. Come to the truly PREMIERE experience with your date for a next level experience, or, just come later after 10 DANCE PARTY TICKET with a group for dancing.

No cheap or cold buffets. No poor service. “A higher end experience for A sophisticated discerning clientele” now in its 8th year.

PATRICK LAMB AND HIT FACTORY
Simply one of the Northwests most widely known and acclaimed artists. Patrick’s last three singles recently made top 5 nationally on the Billboard Charts on his independent label, and Patrick has been inducted as one of the youngest members into the Oregon Music Hall of Fame. Recently given the Independent Spirit Award by the City of Portland Patrick regularly tours the the world or shares the stage as the ‘saxophonist to the stars’ with with Grammy winners and luminaries. Get ready to party!

Dan Reed Network
The Dan Reed Network formed in Portland, Oregon and began packing out the local clubs from late 1984 through 1986 with their infectious mixture of hard rock, funk and soul elements. After releasing their local EP ‘Breathless’ with Dark Horse Records and finding a top ten single on local radio entitled ‘Steal Me’ DRN signed to Polygram/Mercury Records with the aid of Derek Shulman, who was enjoying great success with his other signings ‘Bon Jovi’ and ‘Cinderlla’. DRN were then managed by legendary concert promoter Bill Graham from San Francisco, who at the time compared the energy of DRN to the first time he say The Rolling Stones on stage. In the winter of 1987 the group released their debut album, produced by Bruce Fairbairn (Bon Jovi, Aerosmith) and engineered/mixed by Mike Fraser in Vancouver, Canada. They released their first single “Ritual”, which peaked at number 38 on the US Billboard Charts and was a staple of what became known as ‘Funk Rock’. The Dan Reed Network album received many positive reviews, not the least of which being a four-star write-up from the notoriously hard-to-please ‘Rolling Stone Magazine’. The first album brought DRN over to Europe and created the legendary performances at the Marquee Club in London and the The Melody Club in Stockholm which are still talked about to this day. While at the Rock and Roll Hall of Fame induction ceremony in January 1989 in New York Dan Reed met up with producer Nile Rogers (Duran Duran, Madonna, David Bowie) and this meeting led to the creation of Slam, produced by Rodgers, and better represented the Dan Reed Network’s live sound and accelerated the band’s growing status in Europe. At this time Def Leppard’s managers Cliff Burnstein and Peter Mensch would take the management reigns and offer the Dan Reed Network up as the opener for the the European leg of Bon Jovi’s ‘New Jersey Tour’ in 1989 and the Rolling Stones’ European ‘Urban Jungle Tour’ in 1990.

Dancer, songwriter, actress, and singer who was a runner-up nominee for Clear Channel’s Channel One News “Artist of the Year,” she has been featured on Chicago’s Morning show WGN, MTV, VH1, Fanlala, and Kidzbop. In 2014, she became a competitor on the 14th season of American Idol.

“Find your passion and pursue that as a career. You’ll be a lot happier, and you’ll naturally put in the effort to be successful”

Ken Boddie is co-anchor of “KOIN 6 News This Morning “ every weekday, and produces a weekly segment called “Where We Live”, which gives Portland viewers the backstory of local landmarks, events, street names, and historical figures.

In 2016, Ken was awarded one of Portland’s highest civic honors when he was named an honorary Royal Rosarian. He has received numerous civic awards, and has been recognized by the Associated Press for his work.

Ken is also known for his community work, especially with young people. He is a former Board Member of PDXJazz, which produces the Portland Jazz Festival every February. His support of local musicians is well-known, as he often acts as emcee for events in Portland’s vibrant music scene.