We are giving away a pair of tickets to Galactic featuring Anjelika Jelly Joseph Dirty Revival @ Crystal Ballroom on March 21. To win, comment on this post why you’d like to attend. Winner will be drawn and emailed March 16. 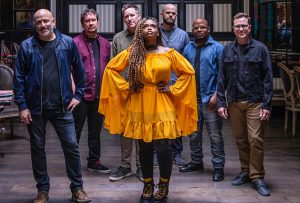 Produced by the band’s Robert Mercurio and Ben Ellman, the new LP finds Galactic once again enlisting a diverse array of vocal collaborators to assist in their musical exploration, each of whom lend lyrical flavor and individualistic personality to the band’s multi-faceted sonic grooves. Bookended by a high powered pair of trademark Galactic instrumentals that give the album its title, ALREADY READY ALREADY. The album is a short, sharp blast of undeniable creative muscle, from the stripped down kick/snap verses of “Going Straight Crazy,” featuring New Orleans singer (and YouTube sensation) Princess Shaw, to punk cabaret artist Boyfriend’s quirky speed-rap on the breakneck “Dance At My Funeral.” As ever, Galactic’s omnivorous musical interests make easy classification utterly impossible – ALREADY READY ALREADY is as all encompassing and universal as the band’s moniker established long ago.

“I’ve never been able to put a label on what we do,” Ellman says. “I could say it’s funk or I could say it’s R&B or jazz or whatever else, but really, it’s all of that.”

“It’s not that we’re always trying to push boundaries,” says Mercurio. “But we definitely take influence from our hometown and try to do something new with it. We tour all around the world and we’re exposed to tons of elements that filter their way into our consciousness and come out through our music.”