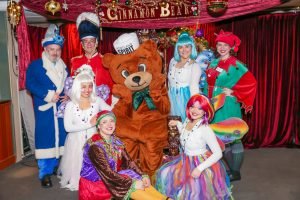 Join us aboard the Portland Spirit as we magically transform the boat into Maybeland from the classic radio show and beloved children’s book. Magical fairies and elves will greet you as Captain Taffy and his crew get the cruise underway. We’ll have story time with Queen Melissa, Presto the Magician will perform his magic show and Cinnamon Bear himself will be there for photos w/the kids. The two hour cruise will keep the whole family entertained! Make it your holiday tradition! Check out CinnamonBearCruise.com for information and to purchase tickets.

“The Cinnamon Bear” began life in 1937 as a holiday radio program written by Granville and Elizabeth Heisch. The charming twenty-six chapter series has been broadcast between Thanksgiving and Christmas for decades. Each fifteen minute chapter follows the Barton Twins, Judy and Jimmy, on their search for the silver star for the top of their Christmas tree. Paddy O’Cinnamon, The Cinnamon Bear brings Judy and Jimmy to the magical world of Maybeland in search of their star. On their journey they encounter a roster of delightful and enchanting characters: Crazy Quilt Dragon, Captain Taffy and the Candy Buccaneers, Wintergreen Witch, Jack Frost and of course Santa Claus! All twenty-six episodes can be streamed and downloaded for free at CinnamonBearCruise.com.

The Cinnamon Bear was so popular from the 1940’s through the mid 1980’s that his holiday appearances in department stores across the country, such as Lipman Wolfe’s (and eventually Frederick & Nelson), Weiboldt’s in Chicago and Weinstock-Lubin’s, were anticipated with as much excitement and wonder as Santa! Portland Spirit has created a likeness of the original Paddy O’Cinnamon in an illustrated children’s book and has turned the Portland Spirit into Maybeland for a month of cruises every December since 2005.

Pricing:
Pricing starts at $43 adults, $33 children ages 1-12, $15 for children under 1.
Includes one photo with The Cinnamon Bear for each child, a light snack buffet, entertainment and, keeping with the time honored tradition, a homemade Cinnamon Bear Cookie.

*Pricing does not include the $5 per person landing fee.