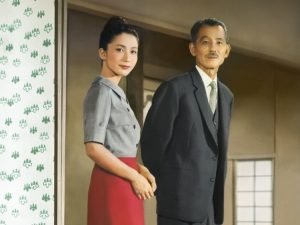 An Autumn Afternoon is Ozu’s tender farewell film and the last of the family dramas he so beautifully directed. The film focuses on a widower Shuhei (Chishu Ryu) who feels obligated to find a suitor for his daughter Michiko (Shima Iwashita). He begins to resign to the changes around him in a world that is rapidly modernizing.

The film represents many of the themes that Ozu spent his life trying to capture on celluloid: loneliness, family, and marriage. The slow pace of the film, natural acting, and static camera allow us to see the changes in the family’s fixed existence. The film is therapeutic in its message about life: things change and we carry on the best we can.