We are giving away a pair of tickets to Jesse Cook @ Aladdin Theater on November 21. To win, comment on this post why you’d like to attend. Winner will be drawn and emailed November 18. 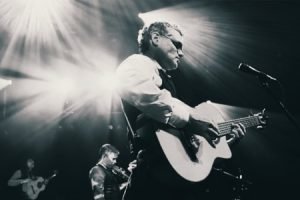 For Jesse Cook, music has been a journey. Sonically and literally.

“Over the years, I’ve taken my music and tried to cross-pollinate it with music from different parts of the world,” explains the 50-year-old global-guitar virtuoso. “For the (2003) album Nomad, I went to Cairo and recorded with musicians there. On my (2009) record The Rumba Foundation, I went to Colombia, and worked with musicians from Cuba as well. On (1998’s) Vertigo, I went down to Lafayette, La., and recorded with Buckwheat Zydeco. For me, the question has always been: Where did you go? Where did you take your guitar?”

The short answer this time? Nowhere. And everywhere. After two decades of criss-crossing the world in restless pursuit of inspiration, innovation and collaboration, the Paris-born, Toronto-raised Cook changed course for his ninth studio album One World, out April, 28th, 2015 on eOne Music Canada. Instead of exotic locales, he stayed home in his studio. Instead of a foreign legion of performers, he relied on his own devices. And instead of exploring cul de sacs of music — flamenco, classical, rumba, world beat, pop, blues or jazz — he united them.

“On this record, it’s not really about going someplace,” he says of the album, whose cover depicts a vast, ancient tree. “The idea is that there really is just one world. If you pull your focus back far enough, you start to see all music as being branches of the same tree. They’re all connected to the same trunk from way back.

“For example, my strange way of playing guitar is a hybrid of styles. I was a classical guitarist as a kid, and I studied flamenco and then I studied jazz. So there are three musical and guitar traditions in my background. And one of the forms I use, rumba flamenco, is itself a hybrid created in the 1800s when sailors were coming back to Spain from Cuba, having heard these Cuban rhythms. And here I am, 150 years later, taking it and mixing it back with modern music and seeing where it takes me. Music is a constantly evolving thing.”