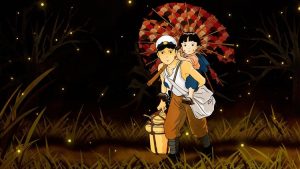 A portrait of the citizenry of Japan throughout the Pacific War, Grave of the Fireflies generates a remembrance and visceral understanding of the impact on the Japanese themselves. Manga and anime have often been used for Japanese self perception, allowing for a distinct reshaping and outlet for historical trauma.

However, for us in the United States this film is a chance to reconcile our own military actions. Understanding them from a purely human perspective as opposed to the Americentrism that permeates our interaction and education of the events of WWII.