We are giving away a pair of tickets to The Infamous Stringdusters, Yonder Mountain String Band @ Crystal Ballroom on January 17. To win, comment on this post why you’d like to attend. Winner will be drawn and emailed January 13. 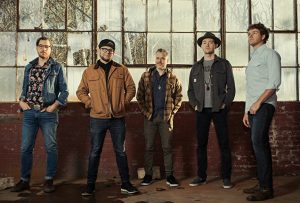 Once again sail into uncharted territory moored only by their expressive patchwork of all-American bluegrass threaded together with strands of rock, jazz, funk, country, old-time and more.

As they approached this latest body of work, the group’s ambition matched their outsized creative curiosity.

“Rise Sun was sparked by the feeling of wanting something better for the world — more love, more awareness and more compassion,” says Hall. “It’s a message of taking care of each other, our planet and ourselves. We all shared this feeling as evidenced by the songs we brought to the project. It’s the feeling of a rising sun as opposed to a dark night. Sometimes a message of hope is less popular than one of despair, but it’s much-needed nevertheless.”

Yonder Mountain String Band
For the past 20 years, Yonder Mountain String Band has redefined bluegrass music, expanding the traditional acoustic genre beyond its previously established boundaries by steadily pushing the envelope into the realms of rock n’ roll and improvisation. YMSB — guitarist Adam Aijala, bassist Ben Kaufmann, banjo player Dave Johnston, Jacob Joliff on mandolin and violinist Allie Kral — has always played music of their own design, in the process attracting a devout following of fans that often resembles a tight-knit family on an epic musical journey as Yonder traverses the country with an ambitious tour schedule. YMSB is a quintessential ensemble honing its craft night after night on the road, and the fans are there to experience it in real time. The result is music that doesn’t stand still, it’s always progressing and breaking unprecedented ground.