We are giving away a pair of tickets to Grace Potter @ Crystal Ballroom on March 13. To win, comment on this post why you’d like to attend. Winner will be drawn and emailed March 9. 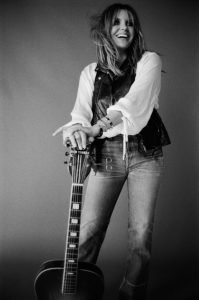 In the years that followed the release of her widely acclaimed 2015 album Midnight, Grace Potter considered never putting out a record again. Having endured the tumult of the breakup of her band and subsequent divorce — as well as far more joyful events like a new marriage and the birth of her first child — Potter continued writing on her own, but had no intention of sharing those songs with the world.

“Too many things had happened, and I needed to take a step back,” says the Vermont-born artist. “There were moments where I thought, ‘Maybe I’ll just go back to painting houses.’”

But by the end of 2017, Potter began to feel the call of the studio and soon started laying down tracks in the Topanga Canyon home she’d recently settled into with her husband, Midnight producer Eric Valentine. Unsigned and entirely free of any pressure to appease, Potter slowly carved out the songs that now make up Daylight: an album that emerges as her most emotionally revealing, musically daring and exactingly realized body of work to date.

“In the past, I’ve aimed to write songs from a universal perspective; so that anyone who heard my music could relate, but that actually made it harder for me to take ownership of my own perspective. This new collection of songs were all written so that I could process – and be accountable for – my own life experience,” Potter says. “I had just pulled the ripcord on my whole life. It was an incredibly jarring, private experience. When the dust settled a bit, the last thing I wanted to do was tell the whole world about it. It was a very gradual process of re-framing music and its purpose in my life. So when I finally started writing songs again – I did it for me.”

Potter’s seventh full-length and first release for Fantasy Records, Daylight was created in close collaboration with producer/mixer/engineer Eric Valentine. In constructing the album’s wild collage of rock-and-roll, blues and soul, Potter tapped into her tightly honed musicianship while harnessing the untamed energy of her live performance for the very first time. “I had kind of resigned myself to the fact that I was always going to be better live than in the studio – but Eric was determined to tap into that raw energy that I have onstage.” she says. “He chased down a few different approaches, ultimately creating a kind of live music venue setup in his studio, so I could feel the sound reflecting off the walls and interact with the band instead of just singing into a void.”

Partly recorded in Potter’s garage and living room, Daylight mostly came to life through a series of live-to-tape sessions at Valentine’s Hollywood studio, Barefoot Recording. Along with capturing the undeniable vocal power Potter’s previously shown in sharing the stage with The Rolling Stones, Robert Plant and Neil Young, the album unfolds with an irresistibly vital sound birthed with the help of guests like Benmont Tench and Lucius. “Having all these incredible musicians playing live in the room with me gave the recording an urgency — like, this matters right now,” Potter recalls.

On the album-opener “Love Is Love,” Potter brings that urgency to a breathtaking slow-burner, her voice shifting from fragile to soaring with understated elegance. The very first piece written for Daylight, the track finds Potter fully surrendering to unbridled feeling — a process so unsettling, it temporarily put her off from attempting any further self-examination in song form. “‘Love Is Love’ is so confessional, it was terrifying. I dove deep into the darkest corners of my personal life.” she says. “After we recorded the demo, I had no desire to keep on writing because the feelings were still too raw. I wasn’t ready to dig any deeper.”

Just one song later, Potter proves to have wholly conquered that fear, turning out a full-tilt rocker raging with pure passion. With her vocals taking on a gravelly intensity, “On My Way” telegraphs unhinged joy as Potter documents a particularly fraught moment from the past few years when she took a solo drive across the country. “Once you allow certain feelings in, there’s no turning back.” Freewheeling and cathartic, “On My Way” builds its frenetic tension in part from a riff that she and Valentine conjured up on their back porch. “Musically, it’s meant to take you in two directions — there’s a powerful tension between darkness and light. It’s a theme that plays out a lot on this record, and that riff kind of just says it all.” Potter notes.