We are giving you another chance to win a pair of tickets to Queensrÿche @ Crystal Ballroom on February 4. To win, comment on this post why you’d like to attend. Winner will be drawn and emailed January 24. 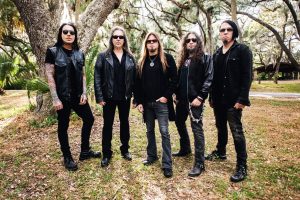 Fact: Queensrÿche have never been a band to rest on their laurels. In a career set against the new-millennium’s backdrop of cultural chaos, they’ve remained a constant; musically innovative and lyrically thought-provoking. One of rock’s most respected names who have weathered the storm and emerged in 2019 with The Verdict. It’s an album that echoes Queensrÿche’s three decades of career high-points while pushing ahead with the confidence and urgency of a band just now coming into its own.

With a legacy behind them that’s shifted over 30 million records and built a dedicated legion of fans while touring the globe alongside giants including Metallica, Def Leppard and The Scorpions, Queensrÿche have exceeded themselves once again. If Queensrÿche’s 15th studio album sounds like a young, hungry band just hitting its stride, it’s because that is precisely the case. Produced and mixed by Chris “Zeuss” Harris (Hatebreed, Rob Zombie), who helmed 2015’s Condition Human, it’s also Queensrÿche’s third album with frontman Todd La Torre, who joined the veteran band in 2012, taking the reins from erstwhile voice, Geoff Tate.

“The Verdict is that statement for us – in much the same way that [1984’s] The Warning was,” says founding guitarist Michael Wilton. “This one’s the creative convergence of this lineup. We got together and worked on every song as a band. The spontaneity, the creativity; it came out of all of us, working together as a band should.” From the hypnotic riff and melody of “Light Years” to the moodiness of “Dark Reverie” or the epic rock n’ roll workout of “Propaganda Fashion,” this is a record that stands up to Queensrÿche’s gold and platinum watersheds including Rage for Order, Empire or Promised Land.