We are giving away a pair of tickets to Bollywood Horror XVII Halloween Costume Dance Party @ Jack London Revue on October 26. To win, comment on this post why you’d like to attend. Winner will be drawn and emailed Monday, October 21. 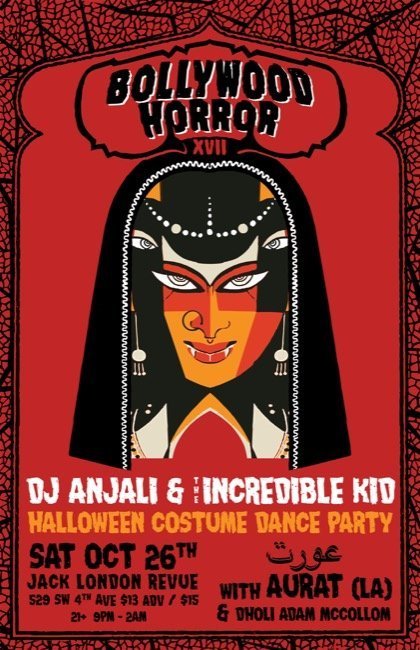 The longest-running Bollywood Halloween party in the world is a Portland original, a wild dance party celebrating 17 years of raucous costumed merriment hosted by DJ Anjali and The Incredible Kid.

Only the wickedest beats from the subcontinent: cower at the thundering dhols, shiver at the piercing wails of Bollywood divas.

This year at the historic Jack London Revue in downtown Portland. Costumes not required but highly recommended.

Featuring the Portland debut of LA’s AURAT.
Aurat (woman in Urdu) is a music group that embraces lyrics in the native language of their lead vocalist Azeka Kamal, a Pakistani-American & and the nontraditional sounds of Gil Talbot’s production.

DJ Anjali and The Incredible Kid have spent more than eighteen years igniting dance floors with cutting edge music not limited by borders or language. They host the longest-running Bhangra and Bollywood party in the world (Andaz est. 2002), co-founded the Pacific Northwest’s first Global Bass dance party (Atlas 2003-2013) and host two weekly radio shows (CHOR BAZAAR on XRAY.FM and Kabhi Khushi Kabhie Kush on KBOO.FM.) In 2013 Anjali and The Kid initiated TROPITAAL! A Desi Latino Soundclash, which they host monthly at The Goodfoot.

After making a name for themselves in their hometown’s raucous house party circuit, DJ Anjali & The Incredible Kid introduced the Portland, Oregon nightclub scene to the sounds of Bhangra, Bollywood and Global Bass on New Year’s Eve 2000. A series of residencies followed, beginning with a night at the legendary Blackbird, and the duo began hosting their ANDAZ dance parties in July of 2002. The party’s focus on hardcore Panjabi Bhangra and the latest electronic confections from the Bollywood film industry continue to pack the dance floor after 16 years. While ANDAZ was still in the bloom of youth, Anjali and The Kid founded the revolutionary dance night ATLAS (with co-host/DJ E3) at Holocene in November of 2003 to introduce Portland to Global Bass sounds such as: Balkan Beats, Reggaeton, Funk Carioca, 3Ball Guarachero, Digital Cumbia, Urban Desi, French and Arabic Hip-Hop, Rai N B, Reggada, Dembow, Dubstep, Kuduro, Merengue Urbano and a host of other local and diasporic future musics. ATLAS was a vital party in Portland nightlife and the Global Bass scene internationally for more than nine years.

“DJ Anjali & The Kid have been a staple of Portland, Oregon’s club scene for almost two decades, creating spaces for DJs and dancers to enjoy an international mélange of music ranging from bhangra to reggaeton.” Remezcla 12/26/18

“After 18 years as a duo, DJ Anjali & the Incredible Kid are a Portland institution. It’s difficult to think of a local dance night with a more lovingly crafted mix of Bollywood, urban desi and Indian dance pop.” Willamette Week 9/19/18