We are giving away a pair of tickets to Steve Hackett – Genesis Revisited @ Revolution Hall on October 12 . To win, comment on this post why you’d like to attend. Winner will be drawn and emailed Monday, October 7. 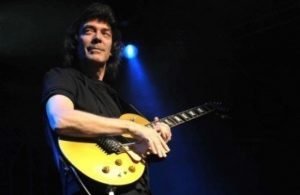 Steve Hackett is renowned as an immensely talented and innovative rock musician. He was lead guitarist with Genesis as part of their classic line up with Gabriel, Collins, Banks and Rutherford, that produced acclaimed albums such as Selling England by the Pound (a favourite of John Lennon). With Steve’s extraordinary versatility in both his electric guitar playing and his composing, he involves influences from many genres, including Jazz, World Music and Blues. He is equally adept in his classical albums that include renditions of pieces by composers from Bach to Satie, his own acoustic guitar compositions that have gained the admiration of many, including Yehudi Menuhin, and ambitious guitar/ orchestra albums such as A Midsummer Night’s Dream, recorded with the Royal Philharmonic.

With Genesis, Steve’s guitar playing produced some of the most memorable moments, from the sensitivity of his acoustic sound on Horizons and Blood on the Rooftops the dramatic rock guitar solos of Firth of Fifth and Fountain of Salmacis. As he embarked on his solo career he developed his exceptional range, pushing musical boundaries into exciting areas, inventing new sounds and also techniques such as ‘tapping’. His solo career went from strength to strength and the mid eighties not only saw the hit single Cell 151, but also the Steve Hackett and Steve Howe super group GTR, highly successful in America.