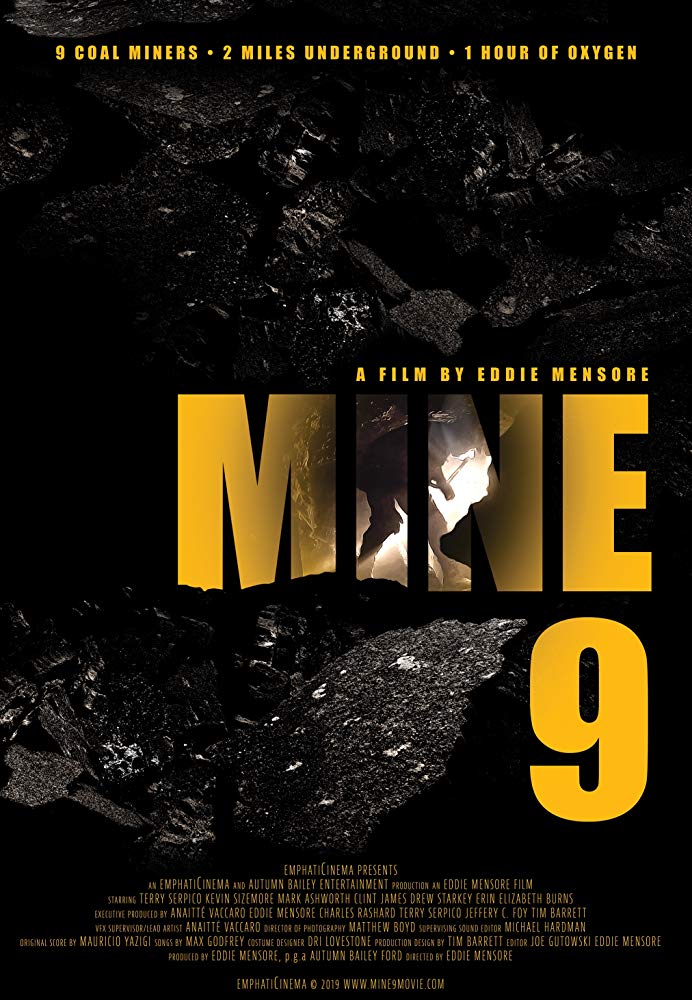 Two miles into the earth, nine Appalachian miners struggle to survive after a methane explosion leaves them with one hour of oxygen.

An impressive piece of work that deploys low-budget filmmaking techniques with cleverness.

…here’s a film about something real, not a horror picture about a group of shapely cavers who descend into the earth and get trapped with monsters chasing them. The monsters in the effective, streamlined thriller “Mine 9” are all around us.

MINE 9
Director: Eddie Mensore
Country: USA
Year: 2019
Runtime: 83 minutes
Mining country in Appalachia has been declared The Devilʼs Playground. A close-knit group of veteran miners, all friends and family, commence what would be a normal dayʼs work — except today a rookie, the son of one of our veterans and the god-son of the Section Leader, joins them, 18 year-old Ryan.

With ever-growing safety concerns at the mine, Zeke (Section Leader and long time coal mining veteran), struggles with the correct course of action, weighing on one hand the safety of his men, and on the other, the need to earn a steady wage in an economically depressed region.

Today, however, fate takes matters into its own hands when a huge methane explosion rips through the mine. Smoke engulfs the men, forcing them to rely on nothing more than brains, brawn and faulty self-rescuers (oxygen tanks that afford them one hour of air).

Mine 9 is the story of the struggle for survival against all odds; men trapped in hell as the result of exploitation, greed and circumstance.