We are giving away a pair of tickets to Devendra Banhart @ Crystal Ballroom on October 18 . To win, comment on this post why you’d like to attend. Winner will be drawn and emailed Monday, October 14. 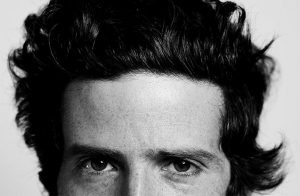 Banhart emerged seemingly out of nowhere in 2002 with his first CD collection, Oh Me Oh My…The Way the Day Goes By the Sun Is Setting Dogs Are Dreaming Lovesongs of the Christmas Spirit, compiled by Swans frontman Michael Gira for his Young God label from homemade recordings the itinerant Banhart had amassed as he traveled the world.

He was born Devendra Obi Banhart in Houston, Texas, but spent his childhood in Caracas, Venezuela; as a teenager, his family returned to the States, relocating in Southern California, where he soon became enamored of skateboard culture. “Ballad of Keenan Milton,” in fact, is an homage to the legendary skateboarder, who died tragically in 2001 in a freak accident.

Music was always a passion for Banhart, and he discovered it in ways both magical and haphazard. As a boy in Caracas, says Banhart, “I was surrounded by salsa, merengue, cumbia, some bossa nova-that was ubiquitous, you’d hear it on any street.” In what could be an excerpt from a David Sedaris monologue, Banhart claims he found his own voice one day when he was home alone and impetuously donned one of his mother’s dresses, grabbed her hair brush and started to sing. What came out was a prepubescent sound he could call his own, a touchstone, something that echoed, years later, in the falsetto of his early albums. In high school, Banhart became obsessed with rocksteady, bluebeat, and ska, which he’d learned about via skateboarding videos.