We are giving away a pair of tickets to Southern Culture on the Skids @ Aladdin Theater on September 3. To win, comment on this post why you’d like to attend. Winner will be drawn and emailed Friday, August 30. 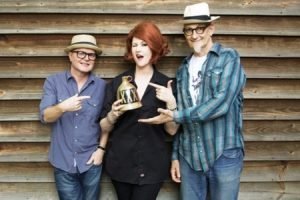 Southern Culture on the Skids
The Chapel Hill, NC trio Southern Culture On The Skids have been spreading the rock and roll gospel since 1983. Rick Miller – guitar/vox, Mary Huff – bass/vox and Dave Hartman – drums, play a greasy mix of surf, rockabilly, R&B and country fried garage with a side of psych. It’s a musical gumbo Miller calls “Americana from the wrong side of the tracks”. Over 30 years the band have toured everywhere from the NC Prison System to Mt. Fuji, Japan, delivering what Rolling Stone calls “a hell raising rock and roll party”

Johnny 7 and the Black Crabs
A lot of people say the same thing about Johnny7 and the Black Crabs. “You guys don’t sound like anybody else.” Sure, it’s a rock ‘n’ roll band with rockabilly influences, but there’s also swing, jazz, and even a taste of spaghetti western.

Their second release, 13 Times, is a case in point. The band moves smoothly from the straight-ahead rockabilly sound of Say Mama to the swinging duet Messin’ Around. They deftly navigate the Les Paul-eqsue instrumental Caravan. There’s even the tune best heard under the Big Top, both because of its country-circus beat and subject matter (quite possibly the first ever song about corndogs).