We are giving away a pair of tickets to Junior Brown @ Aladdin Theater  on September 5. To win, comment on this post why you’d like to attend. Winner will be drawn and emailed Tuesday, September 4. 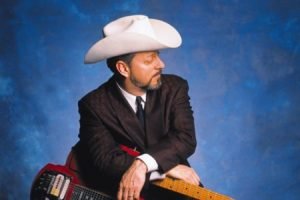 Born in 1952 in Cottonwood, Arizona, Junior Brown showed an affinity for music at an early age. Discovering a guitar in his grandparent’s attic at age seven, he spent the next several years woodshedding with records and the radio. Junior was also able to tap into music he couldn’t hear at home which older, college aged kids were listening to. This was possible as a result of his father’s employment at a nearby campus in 1958. Armed with this broad spectrum of source material, he had developed some formidable chops by the end of his teen years.

Brown’s passion for Country and Western music had intensified by the late 1960’s. With many prominent figures as his inspiration, he spent his nights further sharpening his musical skills in small clubs across the southwest. “I played more nights in honkytonks during the 70’s and 80’s than most musicians will see in a lifetime…I did so many years of that, night after night, four sets a night, 15 minute breaks; I mean after that, you gotta get good or get out.” Brown still prefers to refer to his favorite music as “Country and Western” as it was called when he began his career. More recently, however, with the exception of Classical, Modern Jazz and Rap, he has shown himself to be equally adept at virtually all styles of American music, leading many to dub him America’s most versatile musician. A listen to his catalog of recordings reveals a virtuosity in Country, Western Swing, Hawaiian, Rock and Roll, (Hard Rock, Surf, etc.), Blues, Trad. Jazz, (Swing), Pop, Bluegrass, and even Mariachi.