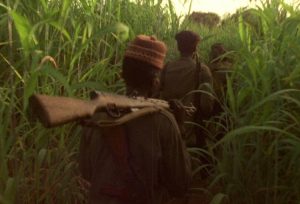 In nine chapters, Afro-French revolutionary Frantz Fanon’s post-colonialist essay (of the same title) from The Wretched of the Earth, as read by Lauryn Hill, discusses the ways in which the native frees oneself from their European oppressor and explores the dehumanizing physical and psychological effects of colonialism. Archival footage of the liberation armies and organized people’s assemblies of Angola, Mozambique and Rhodesia illustrate the movements and mechanisms towards decolonization by the colonized, concerning violence as resistance.