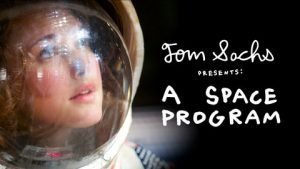 An extension of the Space Camp (2012) and Space Program (2007) short films, directorial mainstay Van Neistat keeps a tight and linear style inline with this and other films coming out of Tom Sachs’ art studio (Ten Bullets, Color, and How To Sweep). A testament to bricolage and solidifying Sachs’ motto “creativity is the enemy”, his visual language and style permeates through this space program, a makeshift, plywood, and sturdy trip to Mars.