We are giving away a pair of tickets to Japanese Breakfast @ Crystal Ballroom on August 23. To win, comment on this post why you’d like to attend. Winner will be drawn and emailed Monday, August 19. 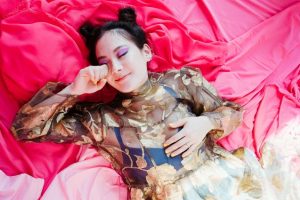 “The title Soft Sounds From Another Planet alludes to the promise of something that may or may not be there. Like a hope in something more. The songs are about human resilience and the strength it takes to claw out of the darkest of spaces.”

Michelle Zauner wrote the debut Japanese Breakfast album in the weeks after her mother died of cancer, thinking she would quit music entirely once it was done. That wasn’t the case. When Psychopomp was released to acclaim in 2016, she was forced to confront her grief. Zauner would find find herself reliving traumatic memories multiple times a day during interviews, trying to remain composed while discussing the most painful experience of her life. Her sophomore album, Soft Sounds From Another Planet, is a transmutation of mourning, a reflection that turns back on the cosmos in search of healing.

“I want to be a woman of regimen,” Zauner sings over a burbling synth on the album’s opening track “Diving Woman.” This serves as Zauner’s mission statement: stick to the routine lest you get derailed, don’t cling to the past, don’t descend. In fact, ascend to the stars; Zauner found artistic solace removed from Earth, in outer space and science fiction. “I used the theme as a means to disassociate from trauma,” she explains. “Space used as a place of fantasy.”

And yet, Soft Sounds From Another Planet isn’t a concept album. Over the course of 12 tracks, Zauner explores an expansive thematic universe, a cohesive outpouring of unlike parts structured to create a galaxy of her own design. In the instrumental “Planetary Ambience,” synths communicate the way extraterrestrials might, and on the shapeshifting single “Machinist,” which Zauner has been performing live for over a year now, she details the sci-fi narrative of a woman falling in love with a machine. “It’s pure fiction,” she explains, “But it can map onto real relationships in a relevant way.” The track, which begins with spoken-word ambience, moves into autotune ‘80s pop bliss and ends with a sultry saxophone solo, perfectly marries the experience: there’s a perceptible humanity in mechanical, bodily events.