We are giving away a pair of tasting packages to Oregon Brewers Festival @ Tom McCall Waterfront Park on July 24-27. To win, comment on this post why you’d like to attend. Winner will be drawn and emailed Monday, July 22. 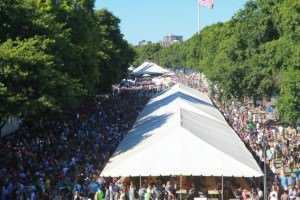 The Oregon Brewers Festival has announced details for this summer’s 32nd annual event, and for the first time in the festival’s history, it will feature 100 percent Oregon craft beers and ciders, with more than 85 of these being first-release products that will debut at the event. From Allegory to Zoiglhaus, the Oregon Brewers Festival will pour 101 products from 93 breweries and eight cider houses in 34 cities––from the Pacific Coast to the High Desert, and the Cascade Mountains to the Willamette Valley. Participants range from the nano-est of nanos to some of the powerhouses of the craft brewing industry.

The 32nd annual Oregon Brewers Festival will take place Wednesday, July 24 through Saturday, July 27 at Tom McCall Waterfront Park in downtown Portland; the festival will not occur on Sunday for the first time since its inception. Gates open at 11:30am daily, and taps are open from Noon to 9pm.

“When we originally started this festival in July 1988, there were only six craft breweries making beer in the entire state of Oregon; we invited successful craft breweries from around the country to help expose locals to the concept of craft beer. Breweries like Alaskan Brewing, Bell’s Brewery in Michigan, Sierra Nevada in California, and Bayern in Montana helped us kick off the inaugural event,” explained Art Larrance, Oregon Brewers Festival Director and Founder. “Today, there are close to 300 breweries in our own state, and we felt it was time to really showcase all the regions that make Oregon one of the most successful craft beer hubs in the world.”

Between 55,000 and 85,000 beer lover annually travel from around the world to attend the Oregon Brewers Festival, which is considered one of the nation’s longest-running and best-loved craft beer events. The festival will also feature a Meet the Brewer Tent, a Brewer Dunk Tank, five food booths, a number of beer related vendors, games, homebrewing demonstrations, and the Crater Lake Soda Garden offering complimentary handcrafted soda to designated drivers and minors.

The Oregon Brewers Festival is not a ticketed event; it is free to enter the festival grounds. In order to taste beer and cider, the purchase of a tasting package is required, which costs $20 and includes the current year’s souvenir mug and 10 beer tokens. Patrons pay four tokens for a full mug of beer or cider, or one token for a taste. Additional tokens may be purchased for $1 apiece. Mugs and tokens are sold on-site, as well as at a few select locations two weeks in advance of the event. The festival is cash-only, with eight ATMs located on-premise. The festival allows minors all hours of the event when accompanied by a parent; animals are not allowed, unless ADA.

The Oregon Brewers Festival encourages responsible drinking and urges patrons to take Tri-Met; the MAX Light Rail has a station one block from the main entrance. Alternately, attendees who ride their bikes can park them for free in the Hopworks Urban Brewery secure bike corral.

This year’s Grand Marshal will be the Unipiper, aka Brian Kidd, an avid homebrewer who has been a loyal supporter of the festival for years. The Unipiper has been taking part in the Oregon Brewers Parade for a number of years; this year, he will lead the parade on Wednesday, July 24, from Ecliptic Brewing to the opening ceremonies at Waterfront Park, where he will also tap the official first keg.