We are giving away a pair of one-day passes for Portland Queer Comedy Festival on Friday, July 19. To win, comment on this post why you’d like to attend. Winner will be drawn and emailed Monday, July 15. 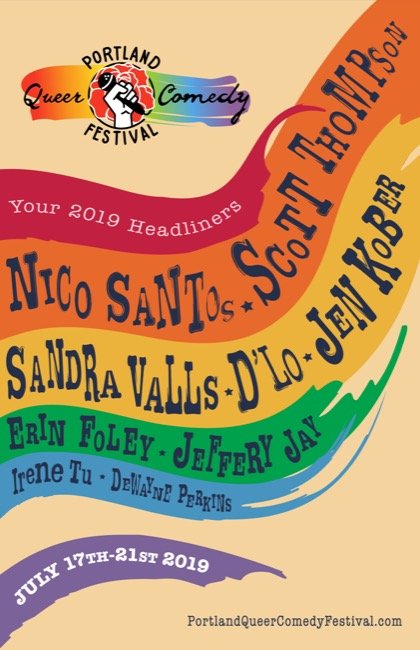 Featuring 5 stages and over 40 comics, Portland Queer Comedy Festival aims to bring the best and brightest talent in international LGBTQ stand-up comedy to a beautiful, diverse and inclusive Portland, Oregon; while giving back to the local community that supports us through non-profit initiatives. The venues are conveniently located to one another creating a fun pub-crawl atmosphere!

We have invited some of our favorite comics including the legendary Scott Thompson!

A full line-up, show information, and ticketing is available on our website at www.PortlandQueerComedyFestival.com

Incorporating proven Funhouse Lounge formatted shows such as Comic Strip, Imma Leave You With This and SMUT; we will also be bringing special guest shows such as Erin Foley’s podcast “Sports without Balls” and Seattle’s wild “Safeword ” hosted by Bobby Higley; as well as traditional comedy showcases! This year we are so excited to bring the legendary Scott Thompson from Kids In The Hall presenting “A Special Night with Buddy Cole” on Wednesday July 17th, 2019 at 7:00 pm and 9:30 pm at Curious Comedy Theater!

Passes are on sale May 15th at www.PortlandQueerComedyFestival.com. A general pass for four days is $70 with other pass options available.

*all information subject to change*