We are giving you another chance to WIN a pair of tickets to MIYAVI @ Crystal Ballroom on July 27. To win, comment on this post why you’d like to attend. Winner will be drawn and emailed Monday, July 22. 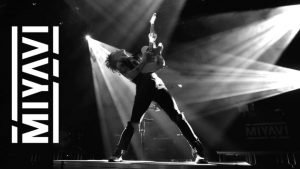 MIYAVI is a musician, actor, and philanthropist, bridging cultures across the globe with his music and message. His unique style of guitar playing has taken him on 7 world tours in over 30 countries. Most recently, you can find MIYAVI as the face of Beats headphones in Japan or walking the runway for Yohji Yamamoto & Y3 at his 2018 Paris Collection.

He also continues his important work as a Goodwill Ambassador to UNHCR, visiting refugee camps in Lebanon, Thailand and Bangladesh, and performing at the United Nations in New York, spreading the message of the refugee crisis around the world. MIYAVI’s acting debut in the Oscar nominated film Unbroken brought him into Hollywood. He has since appeared in the 2017 blockbuster Kong:Skull Island and the film Stray (2018). Fans refer to Miyavi as the “Samurai Guitarist.”