We are giving away a pair of tickets to v Steve Swatkins’ Positive Agenda, Deltaphonic @ The Goodfoot on July 3. To win, comment on this post why you’d like to attend. Winner will be drawn and emailed Wednesday, July 3. 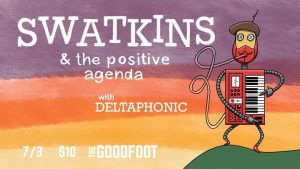 Deltaphonic is a New Orleans collective, primarily touring as a duo, that blends fingerpicking blues rock, funk, and roots rock into a surprisingly big sound. Since its formation in 2014, the band has released two critically acclaimed albums, performed at the 2018 New Orleans French Quarter Fest as well as some of New Orleans’ most iconic venues, and maintained a national tour schedule averaging 100 dates/year.

Propelled by the frenetic performances and memorable songwriting of band leader Andrew T. Weekes and drummer Ciaran Brennan, Deltaphonic has cultivated a distinct sound that veteran music critic Robert Fontenot described this way: “If you opened a lounge outdoors in a graveyard next to a swamp, this would be the only album you’d need on the jukebox … NOLA finally has an answer for the Black Keys and the White Stripes—dark Americana with history’s dust shaken off.”

Though primarily touring as a duo, Deltaphonic consistently performs with variety of guest musicians in New Orleans with Weekes being the only member present at every show. Past guests include Khris Royal, Paul Provosty (Earphunk), Ed Williams (The Revivalists), Eric “Benny” Bloom (Lettuce, Pretty Lights Live Band), Russell Batiste (The Funky Meters), and many more. The band is currently working on a third album set for release in 2019. $10