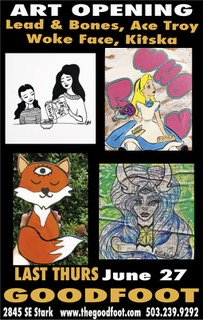 The Goodfoot will have an art opening on last Thurs June 27th from 5pm – 2 am. This months artists are Ace Troy, Kitska, Lead & Bones & Wokeface.

Ace Troy is a born and raised Portland artist who has been dabbling with stencils and spray paint since 2005. His art has appeared on Portlandia and the social media of many celebrities including Lavar Burton, No Doubt and George Takei. He has also done work for Pabst Blue Ribbon, permanently on display in their corporate offices in LA. In more recent years Ace Troy has turned to VHS tapes, cassettes, beer cans, drawers, soup cans and just about anything else he can get his hands on to use as canvas. He continues to live a happy life surrounded by spray paint in downtown Portland.

Originally from the East Coast, she now calls Portland her home. Kitska has spent her life learning fine art techniques and studying art history. It wasn’t until 2015 after a chance encounter with a Portland street artist known as Skam that she got involved in the world of public art. Now, four years later Kitska continues to grow through street art and has flourished artistically due to the unyielding support of her peers. All of Kitska’s work is a reflection of what she sees in her subconscious combined with the aesthetic influences of Frida Kahlo, the Ancient Egyptians, Romans, and Byzantine iconography that surrounded her in her youth. The humanoid beings and various creatures that manifest themselves in her dreams eventually found their way into her art and have become an obsession.

Lead and Bones is a self taught Portland based artist who works in various mediums to assuage her boredom with the repetitiveness of recreating the same image. Her artistic journey began at a young age, being able to express her creativity is one of the most important things in her life. As an adult she began illustrating works of art with stirring statements relating to her past and current experiences. Lead and Bones shines a light on tough, often overlooked subjects. She posses an innate ability to face sensitive and humbling topics head-on with such clever, compassionate clarity that people find themselves laughing at something that would normally be taboo or embarrassing.

Why do you draw?
“Shit gets hard and it hurts, and like an asshole I push it out because it’ll feel better later” -L&B

Wokeface is the project of an artist living in Portland, Oregon USA whose primary canvas is the streets. You can see their artwork on stickers, pastes, murals and wood installations sprinkled all over the city and beyond.
Wokeface’s goal is to facilitate self love and a sense of connectedness to fuel a more compassionate and harmonious existence.