We are giving away a pair of tickets to Steve Earle & The Dukes + Lukas Nelson & Promise of the Real @ Oregon Zoo on August 11. To win, comment on this post why you’d like to attend. Winner will be drawn and emailed Monday, July 29. 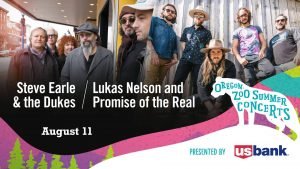 In the strictest sense, Steve Earle isn’t a country artist; he’s a roots rocker. Earle emerged in the mid-’80s, after Bruce Springsteen had popularized populist rock & roll and Dwight Yoakam had kick-started the neo-traditionalist movement in country music. At first, Earle appeared to be more indebted to the rock side than country, as he played a stripped-down, neo-rockabilly style that occasionally verged on outlaw country. However, his unwillingness to conform to the rules of Nashville or rock & roll meant that he never broke through into either genre’s mainstream. Instead, he cultivated a dedicated cult following, drawing from both the country and rock audiences, the former with his 1986 debut Guitar Town, and the latter with 1988’s commercial breakthrough Copperhead Road. Toward the early ’90s, his career was thrown off track by personal problems and substance abuse, but he re-emerged stronger and healthier several years later, producing two of his most critically acclaimed albums ever, 1995’s Train A’Comin’ and 1996’s I Feel Alright. Earle celebrated his love for bluegrass on 1999’s The Mountain (cut with the Del McCoury Band), while his progressive political views dominated his work from 2002’s Jerusalem through 2007’s Washington Square Serenade. Earle embraced more personal themes on 2011’s I’ll Never Get Out Of This World Alive, but he made a full-bodied return to country sounds with 2017’s So You Wannabe An Outlaw.

Lukas Nelson & Promise of the Real
Since forming 10 years ago, the buzz surrounding Lukas Nelson & Promise of the Real has been quietly intensifying. During that time, the 28-year old singer/songwriter/guitarist and his bandmates have played hundreds of shows and major festivals all over the world and built a devoted underground following. Lukas’ profile continued to rise when he contributed three songs and heavenly vocals to his dad Willie Nelson’s 2012 album, Heroes, their voices blending with potent DNA. Then two years later, life took another turn skyward when Neil Young decided to make Promise of the Real his touring and studio band. Young has guided the grateful young musicians ever since as they’ve backed the legend on tour around the world and on his two most recent albums.

These experiences were undoubtedly invaluable, but none of what has come before will prepare you for the cosmic country soul of Lukas Nelson & Promise of the Real, the band’s new, self-titled album, a mesmerizing, emotionally genuine, endlessly rewarding work set for release on Fantasy Records. From the epic “Set Me Down on a Cloud” to the climactic “If I Started Over,” the album delivers one sublime song and inspired performance after another.

“I knew I had a lot of good songs that transcended the cultural boundaries between rock & roll and country,” Lukas says of his vision for the album. “I wanted to get the songs as pure as they could be. We owe a lot to Neil; we made this record after coming off the road with him for two years. Neil’s been mentoring us, and we’ve been absorbing that energy, and I think it shows. We got acclimated to a different level of artistic expression. We’ve grown.”