We are giving away a pair of tickets to Scott Law Electric Band @ The Goodfoot Pub & Lounge on June 22. To win, comment on this post why you’d like to attend. Winner will be drawn and emailed Friday, June 21. 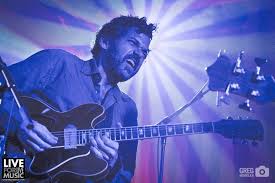 Multifaceted artist Scott Law is a powerful instrumentalist, singer­-songwriter and raconteur operating at the very highest level of his craft. Hailed as an “esteemed flat-picker” by Acoustic Guitar magazine, Law is equally reverent and inventive on electric guitar, acoustic guitar and mandolin and sought after as both leader and accompanist.

Currently, Law co-leads and tours with the band “Scott Law & Ross James’ Cosmic Twang,” with new recorded works of their psychedelic Americana to release in 2019. He plays regularly with Phil Lesh, legendary bass player and founding member of the Grateful Dead in the rotating “Phil Lesh & Friends” cast and continues a week-long monthly residency at the Lesh family’s Terrapin Crossroads venue in San Rafael, California.