We are giving away a pair of tickets to Remo Drive @ Aladdin Theater on June 29. To win, comment on this post why you’d like to attend. Winner will be drawn and emailed Monday, June 24. 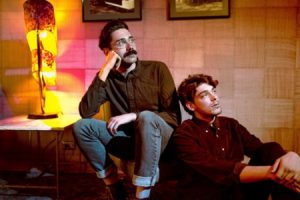 Dubbing your debut full-length Greatest Hits might be a bit of a misnomer—or, at worst, signs of a serious superiority complex—but there’s no bravado when it comes to REMO DRIVE. Instead, the Minnesota-based duo’s first album for Epitaph Records serves as the pinnacle of their four-plus years as a band up until now.

Brothers Erik and Stephen Paulson formed Remo Drive in high school in 2013, inspired by “older kids who smoked weed and listened to Title Fight.” The pair of wide-eye musicians would find their legs in the emo world, but the songs on Greatest Hits—enveloped in themes of suburban malaise and self-reflection—shape-shift throughout all aspects of alternative rock, paying tribute not only to Midwestern emo heavyweights like American Football and The Promise Ring, but also to ’90s grunge and classic rock, among others.

“It’s always going to be about loud guitars and big drums,” Erik Paulson says of Remo Drive’s sound. “The best thing for us to do is not worry so much about aesthetic and focus on whatever feels natural with the overarching idea of being a rock ’n’ roll band.”

That innate honesty permeates every area of the band’s frenetic, spazzy music, from Erik’s lyrics (“I just want to be as honest and straight to the point as possible rather than trying to appear smarter than I actually am”) to the charming DIY video for “Yer Killing Me” that features the band sprinting down the streets of their hometown, instruments and all.

It’s like Remo Drive—unlike many bands under their same genre umbrella—haven’t forgotten that writing and playing music is supposed to be fun. “We try to do things with a lot of energy and gusto,” Paulson says. “I think people can tell that we care a lot. I think our best quality is that we care.”