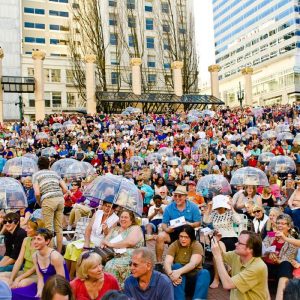 The Low Bar Chorale is Portland’s one and only alt/indie/pop ‘drop-in’ bar chorus and will bring an all-star band packed with musicians who have previously played with Blind Pilot, Brandi Carlisle, The Christopher Brown Band, Todd Rundgren’s Utopia, the Eels, and local non-profit My Voice Music. The event includes special appearances by recording artists China Forbes and Edna Vazquez, and others. Limited edition songbooks, curated by the Low Bar Chorale, will be provided to sing-a- long participants while supplies last.

This year’s event attendees can enjoy a medley of delicious dining options for sale at Carts on the Square, while Oregon Mobile Bar Company will be selling beer, Ruby Jewel will offer a selection of their delicious handmade ice cream sandwiches.

And Rain or shine, event attendees can stay dry with custom Singin’ in the Square purple umbrellas compliments of Portland’s own ShedRain®. ShedRain, the founding sponsor of Singin’ in the Square, will provide free umbrellas to the first 700 attendees. “ShedRain is proud to support this unique community tradition created with Thomas Lauderdale and Pioneer Courthouse Square” says ShedRain President, Jeff Blauer. Founded in 1947, ShedRain® is a family-owned, third-generation company and the industry leader in umbrellas and rainwear. ShedRain markets its brand through local and worldwide retailers, such as Nordstrom, Bloomingdales, Macy’s, Fred Meyer, Target and many other specialty stores. ShedRain also is the leading umbrella producer for private label retail brands in the United States.