We are giving you another chance to WIN TICKETS to Chase Atlantic Phases Tour @ Crystal Ballroom on July 2. To win, comment on this post why you’d like to attend. Winner will be drawn and emailed Friday, June 28. 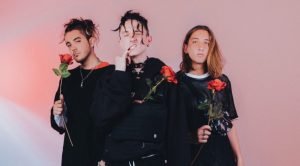 From humble beginnings in their Northeast Australia hometown to worldwide acclaim and ferocious sets on some of the planet’s biggest stages, the alt-pop trio Chase Atlantic are riding high on a wave of their own creation. And with the recent release of their much-anticipated third EP, DON’T TRY THIS, and a sophomore full-length on the way, 2019 looks to be their biggest year yet.

Mitchel Cave and his older brother Clinton formed Chase Atlantic with their best friend, Christian Anthony, in 2014. Classically trained as musicians and singers, the brothers began their obsession with programming and production as teenagers. Spending days locked away in their bedrooms working on beats, they began combining sounds from their favorite genres-from pop to electro to rock and R&B-fusing together an experimental sound that retained catchiness and hooks. Adding live instrumentation and vocals to the mix, the trio recognized their work’s undeniable groove and edge, an eclectic and unique hybrid of dark, rhythmic, and emotional sound-not to mention their shared bond and ability to make singular decisions as a hive mind.

“We’re on the same wavelength,” Mitchel says. “We have the same outlook and that’s why we’ve been such great friends for such a long time. Our music-making is synergistic; we all share the same musical brain. We make music that is hard to define by genre but easy to enjoy.”