We are giving away a pair of tickets to Life During Wartime @ The Goodfoot Pub & Lounge on June 15. To win, comment on this post why you’d like to attend. Winner will be drawn and emailed Friday, June 14. 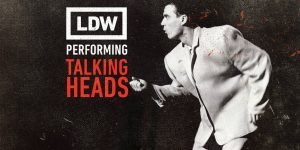 In the summer of 2013 a group of Portland, Oregon musicians got together around the love of Talking Heads music. Especially that of the epic 1984 concert film, Stop Making Sense, which they consider to be the most brilliant concert film of all time. They began to perform with a 7-piece lineup that was inspired by that particular movie and time period. “There was so much funkiness, movement, and excitement to the music in that movie and we just knew it would get people excited and feel fresh” says Lawrence Orleck, co-founder and singer in the band.

Audiences keep coming back to see LDW. Not only for their exuberant interpretations of the legendary Talking Heads, but also for their original music, improvisation, choreography and the random experiences they deliver at every one of their shows. In a matter of 2 years they were playing to sold out shows all over the West Coast.