We are giving away a pair of tickets to Brian Wilson & The Zombies @ Arlene Schnitzer Concert Hall on September 17 To win, comment on this post why you’d like to attend. Winner will be drawn and emailed Monday, September 9. 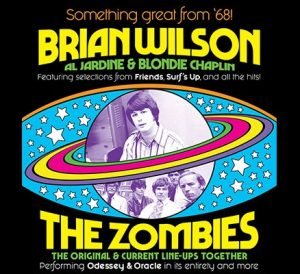 Legendary songwriter Brian Wilson began his career as a teenaged founding member of The Beach Boys, who signed with Capitol Records in July 1962 and released their first album, Surfin’ Safari, that same year. The band’s initial surf-rock focus was soon broadened to include other themes. Wilson’s innovative vocal and instrumental arrangements for major hits including “I Get Around,” “California Girls,” “Wouldn’t It Be Nice,” “God Only Knows,” and the No. 1 smash “Good Vibrations” established The Beach Boys as America’s preeminent band of the 1960s.

In 1965, with The Beach Boys out on tour, Wilson began session work on some of the most deeply personal recordings of his career. Inspired by The Beatles’ Rubber Soul, he challenged himself to create an immaculate musical masterpiece. A vast departure from the then band’s commercial sound, the resulting Pet Sounds “concept album” achieved great critical success helping usher in a new musical landscape.

Wilson has also achieved great success as a solo artist with 11 of his own albums released to-date, including his acclaimed 2004 completion of an album he first began recording in the ‘60s, Brian Wilson Presents… SMiLE. The album earned Wilson his first GRAMMY® for a recording, which was followed by his second GRAMMY® win for producing The Beach Boys’ acclaimed 2011 release, The SMiLE Sessions. With his own band, Wilson has performed major, sold-out tours in recent years, and with The Beach Boys he celebrated the iconic band’s 50th anniversary in 2012 with a major international tour and acclaimed studio album, That’s Why God Made The Radio.

The Zombies
Iconic British psychedelic pop legends The Zombies ​have returned to celebrate their long-awaited Induction into ​The Rock & Roll Hall of Fame. ​After receiving their 4th nomination in five years, the support for The Zombies’ induction among the public and their peers was undeniable – the band placed 4th in the public online poll with over 330,000 votes, while even fellow nominee John Prine called for their induction before his own in a Billboard interview. On March 29, 2019 at Brooklyn’s Barclays Center, The Zombies joined Stevie Nicks, Radiohead, The Cure, Def Leppard, Janet Jackson, and Roxy Music as the 2019 Class of The Rock & Roll Hall of Fame. Fittingly, the Induction Ceremony (which will be broadcasted on HBO) took place exactly 50 years to-the-day after The Zombies’ classic ​“Time of the Season”​ first hit #1 on the charts in America.