We are giving away a pair of tickets to Ural Thomas and The Pain @ Revolution Hall on April 19. To win, comment on this post why you’d like to attend. Winner will be drawn and emailed Monday, April 15. 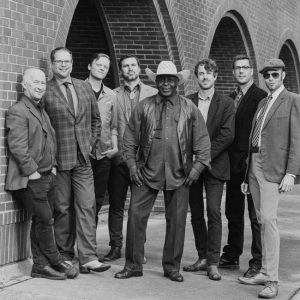 If life was at all fair Ural Thomas would be a household name, his music slotted into countless sweet, seductive mixtapes between James Brown, Otis Redding, and Stevie Wonder (all of whom Thomas has performed with.) Straddling the line between hot soul shouter and velvety-smooth crooner, Thomas released a few singles in the late 60’s and early 70’s; most notably “Can You Dig It”, which featured backing vocals from soul luminaries Merry Clayton, Mary Wells and Brenda Holloway. Thomas played over forty shows at the legendary Apollo Theater before turning his back on an unkind business and heading home to Portland, OR.

It goes without saying that a man practically built out of rhythm would never stop playing music. Thomas began hosting a regular Sunday night jam session at his home that ran for nearly twenty years. A de facto mentor to many of the younger players, Thomas reminds us all that “If you care about what you’re doing, you need to build those muscles and do the work. Don’t get discouraged, do it for love. Even if you’re digging ditches, do it with passion.”

In 2014, local soul DJ Scott Magee sat in on drums. The two became fast friends and at Magee’s urging Thomas decided to give his musical career another shot. Magee became the musical director, they put together a band, and in 2016 released a self-titled album on Mississippi Records.

A developing artist at nearly eighty years old, for Thomas music has always been about bringing people together. “If we play for twenty people we cook it like it’s twenty thousand” says Thomas. “If we make someone smile we’re satisfied. They’re ain’t no difference between us. It’s all love and brotherhood. If folks listen to my record and feel that I’ll feel very blessed.”

Standing in bold defiance of the idea that aging is a reason to slow down and stop living, for Thomas the right time to get down is the next time someone plugs in a guitar or puts on a record. Ural is ready – are you?

Federale
Federale has always operated under the guidance of a larger story arc. 2007’s La Rayar is a classic tale of betrayal and vengeance. 2009’s Devil In A Boot centers on a small town terrorized by a railroad company baron’s expansion and destruction. 2012’s The Blood Flowed Like Wine tells the supernatural tale of an evil so powerful that not even hell can hold back its wrath.

All The Colours Of The Dark continues this tradition while breaking new musical terrain. Though the new record includes cinematic instrumentals and that the band is known for, it also sees Federale expanding their vision to narrative songs in the baritone-driven style of heroes Lee Hazlewood, Scott Walker and Nick Cave. Murder, revenge, regret, power and corruption are the lyrical themes of this collection. This album will be the band’s first on Death Waltz Records. A limited number of colored vinyl is available now in advance of the upcoming wide release.

Orquestra Pacifico Tropical
Deep in the vein filled jungles of each of our hearts beats a music with roots as wide as continents and influence as deep as time itself. Cumbia, music of the Southern American Hemisphere. Orquestra Pacifico Tropical have taken this frenetic, addictive rhythm and accomplished what musicians across time and space have always done, bringing crowds into a blistering dance frenzy. From clubs to the forests of the Pacific Northwest, to hear the ecstatic thump, rumble, and sheer brilliance of the racing rhythms of coastal Colombia side by side with the psychedelic guitar explorations of the Peruvian rain forest is to travel across continents and through time with Orquestra Pacifico Tropical as the guide. WIth respect to those who came and innovated before us, and armed with an arsenal of percussion, woodwinds, horns, accordion and guitars, these 11 friends have come together in the spirit of capturing and breathing new life into this most essential of musics. Cumbia, music of the people.