We are giving away a pair of tickets to Hayes Carll @ Aladdin Theater on April 30. To win, comment on this post why you’d like to attend. Winner will be drawn and emailed Monday, April 22. 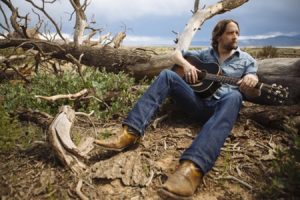 Hayes Carll is at the forefront of a generation of American singer/songwriters. A Texas native, his style of roots-oriented songwriting has been noted for its plain-spoken poetry and sarcastic humor. He was nominated for a 2016 Grammy award for Best Country Song, and American Songwriter awarded him with Song of the Year for “Another Like You” in 2011, the same year he was nominated for Artist of the Year at the Americana Awards.

Now Hayes is returning with a powerful and raw set of songs produced by Joe Henry entitled Lovers and Leavers. The record marks a new chapter for Hayes – he has gone through much personal change in the 5 years since his last release, and he mines the depths of these experiences on this record. Sonically, he has stripped away some of the country sounds that marked his previous records, thus highlighting his well-worn voice and placing his straightforward and heartfelt lyrics at the center.