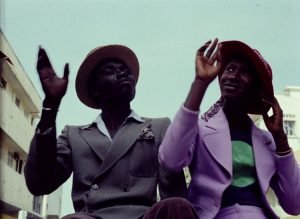 The haze of a newly independent nation is rarely expressed as Djibril Diop Mambéty does in his first feature. Everything in Touki Bouki is avant garde in this way, hybridizing elements of the emerging African cinema of its day — its semi-documentary style, visual metaphors, and its long shots of industrialization — with postmodern tricks of the French New Wave.

Its meandering, free-associating take on the lovers-on-the-run, road movie archetype is no imitation, but instead transformative in its narrative form, organized around a collective feeling and its fluidity of perspective — creating its own universe of wiggly zooms, Francophone songs and trippy time-hopping montages. The resistance Mory and Anta face is the slowly suffocating psychological prison of having been a colonized nation. Their dreams of escaping post-colonial malaise are met with disillusions of Senegal and feelings of being outsiders in their own country.