We are giving away a pair of tickets to Russell Peters- Deported World Tour @ Keller Auditorium on February 8. To win, comment on this post why you’d like to attend. Winner will be drawn and emailed Monday, February 4. 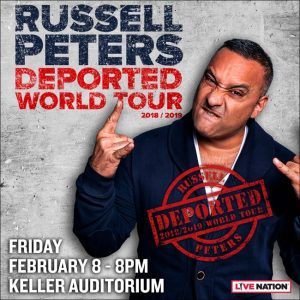 Russell’s back with THE DEPORTED WORLD TOUR featuring ALL NEW MATERIAL.

Russell has also appeared in the still unreleased films, The Clapper with Ed Helms, Amanda Seyfried and Tracy Morgan as well as Supercon with Ryan Kwanten and John Malkovich, and Public Schooled with Judy Greer.

THE DEPORTED WORLD TOUR will take Peters around the world with shows well into 2019. His last tour traveled to more than 26 countries with more than 200 performances and more than 300,000 fans in attendance.