We are giving away a pair of tickets to Co.Lo.So., Zuhg, Cloud Castle @ The Goodfoot on January 2. To win, comment on this post why you’d like to attend. Winner will be drawn and emailed Wednesday, January 23. 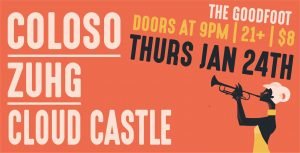 Co.Lo.So., Collection of Lone Souljahs, is a West Coast Reggae band, formed in 2013 by ukulele guy/vocalist/lyricist Kevin Coloso. Kevin left his hometown in Maui, HI and moved to the Pacific Northwest. It was after college that Kevin’s musical talent became impossible to ignore and he began to pursue music with the same fervor and passion with which he attacks all of his projects. Playing along side Kevin you will find various musicians including bassists, drummers, vocalists, percussionists, guitarists, violinists, keyboardists, and horn players. As a band they produce an original and eclectic mix of pop and island reggae.

ZuhG is free-thinking, different, and playful… Musically ZuhG resists being easily defined, mixing funk, reggae, jazz, jam, and rock n’ roll together to create its own expressive genre of music. ZuhG’s sound will push your perceptions of music to new heights. They bring this sound to living color with their album releases: To Be Unlike Others (2007), Life (2009), Fish Tank (2010), and Free Love (2011). ZuhG stripped itself down in early 2013 with the release of an acoustic album (Calm and Clear), giving us a glimpse into the bands uniquely expressive character. Based out of Sacramento California since 2007, ZuhG has been busy carving out its own unique territory up and down the West Coast and on the road touring nationally and hitting the festival circuit. $8