We are giving away a pair of tickets to Warren McPherson’s Solo Show @ The Old Church Concert Hall on February 2. To win, comment on this post why you’d like to attend. Winner will be drawn and emailed Monday, January 28. 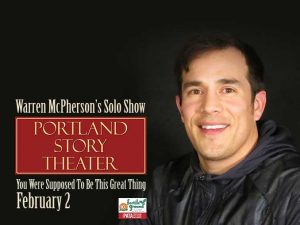 One Show Only! – part of the Fertile Ground Festival!

Our lives are fueled by expectation. Sometimes we make them ourselves. Sometimes they are imposed on us by others. In his very first feature-length solo show Warren McPherson tells stories about his unrealistic hopes for the world and the weight of the expectations his family and the world placed upon him in his early life.

Imagine coming home at the age of six and having to disappoint your mother by telling her that you can’t be the next Pope, after all, because you’re in love with a girl and you’re going to get married instead. Imagine achieving success and acclaim at a sport you secretly hate. Imagine graduating from a prestigious university and then living in your mother’s garage for seven years, like a hermit wandering in the desert. Imagine finding your own path to a success that is not what others expected of you.

You Were Supposed To Be This Great Thing explores what it really means to be great.

Portland Story Theater, Inc. is a 501(c)3 nonprofit 503-284-2226
Launched in 2004, Portland Story Theater is a 501(c)3 non-profit organization dedicated to making the narrative arts an integral part of Portland’s rich cultural identity and is committed to bringing an authentic story and theater experience to inspire, challenge and expand a sense of community in Portland’s urban environment. www.portlandstorytheater.org/