We are giving away a pair of tickets to Steve Gunn @ Aladdin Theater on February 12. To win, comment on this post why you’d like to attend. Winner will be drawn and emailed Friday, February 8. 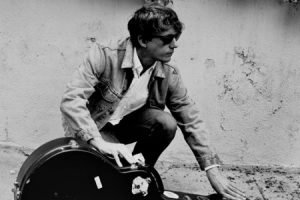 For over a decade, guitarist/vocalist Steve Gunn has been one the American music’s most pivotal figures – conjuring immersive and psychedelic sonic landscapes both live and on record, releasing revered solo albums ranking high on in-the-know end of year lists, alongside exploratory collaborations with artists as diverse as Mike Cooper, Kurt Vile, and Michael Chapman (whose most recent studio album he produced). Gunn is known for telling other people’s stories, but on his breakthrough fourth album, The Unseen In Between, he explores his own emotional landscapes with his most complex, fully realized songs to date. The lyrics evoke voyages, tempests (actual and emotional), and a rich cast of characters met along the way — the work of an artist finding a place of calm in the midst of a storm. Produced by frequent collaborator James Elkington and engineered by Daniel Schlett, the immaculately recorded Unseen forces a reassessment of Gunn’s standing in the pantheon of the era’s great songwriters.

Getting to The Unseen In Between itself was not easy for Gunn. In the summer of 2016, Gunn released Eyes On The Lines, his winning and elliptical debut for Matador. It should have been a triumphant moment, but exactly two weeks later, Gunn’s father and namesake died following a two-year struggle with cancer. During his sickness, he and his son had connected as never before, listening to one another’s experiences and understanding one another’s perspectives; they became not father and son but real friends.

Meg Baird
Meg Baird’s last decade would be remarkable by any artist’s standards. She co-founded and recorded three albums with Espers—one of the most distinctively mysterious acts of the century’s first decade. She recorded three solo LPs for Drag City: Dear Companion, Seasons on Earth and Don’t Weigh down The Light, and she also collaborated with Will Oldham, Kurt Vile, Sharon Van Etten and Steve Gunn, and toured with Bert Jansch.