We are giving away a pair of tickets to ANDAZ: A Bhangra/Bollywood/Desi Bass Dance Party @ The Liquor Store on January 26. To win, comment on this post why you’d like to attend. Winner will be drawn and emailed Friday, January 25. 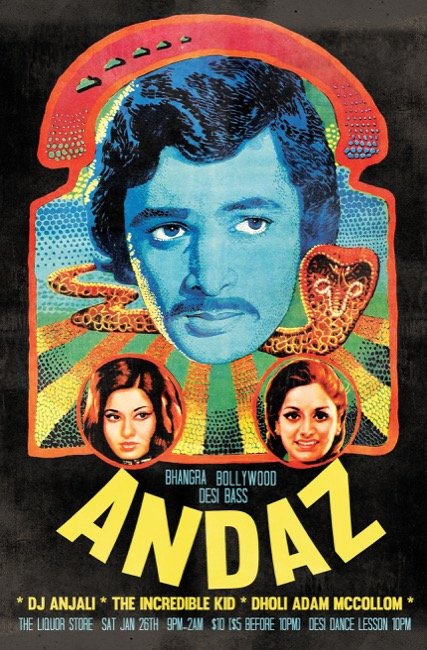 With musician Adam McCollom (SEA) on the dhol.

ANDAZ is the longest-running Bhangra & Bollywood dance party in the world, a transportive experience that has enraptured feverishly dancing Portland crowds for more than 16 years. “DJ Anjali & The Kid have been a staple of Portland, Oregon’s club scene for almost two decades, creating spaces for DJs and dancers to enjoy an international mélange of music ranging from bhangra to reggaeton.” – Remezcla 12/26/18

Anjali and The Incredible Kid won Best DJ in Willamette Week’s Best of Portland 2016 and 2017 Readers’ Poll. The Portland Mercury visited ANDAZ in 2016 and said, “last month’s was WILD. When I arrived around midnight, the Analog Theater’s upstairs was jam-packed for one of Portland’s danciest dance parties.”

Adam McCollom
Seattle based musician Adam McCollom started playing the dhol while living in India in 2003. He’s been the resident dholi at ANDAZ for over a year, hitting the road with Anjali & The Kid to play festivals, concerts-in-the-park & shaadis. His list of former bands is impressive: Degenerate Art Ensemble (guitar/composer), The Vells (bass), The Pica Beats (keyboards/ piano), Breaks & Swells (bass), Brent Arnold and The Spheres (keyboards/piano), Ghosts Ive met (bass), Ota Prota (guitar/composer), Motherland Ensemble (oud). Since his graduation from Cornish (BFA in Music) where studied Jazz with Julian Priester (of Sun Ra Arkestra) and Hadley Caliman, he has studied Khayal (North Indian classical singing) with Pandit Devashish Dey in Varanasi for a full year as well as the Egyptian Oud & the Arabic Maqam system with Egyptian ethnomusicologist Maurice Roman.