We are giving away a pair of tickets to “West Coast High 2019” @ Crystal Ballroom on March 20 . To win, comment on this post why you’d like to attend. Winner will be drawn and emailed Monday, March 11. 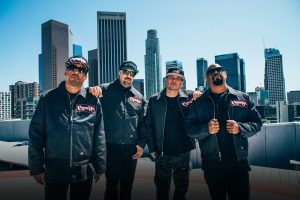 Revolution brews on the fringe. Once sown, those seeds quietly sprout over time until they overtake everything in their path…

Three decades before the Latin hip-hop explosion of 2018, B-Real, Sen Dog, and DJ Muggs of Cypress Hill sparked a trip that left popular culture stoned, stunned, and staggering in anticipation for more. In 1988, Sen Dog, B-Real, and DJ Muggs certainly didn’t look like any other hip-hop collective, sound like anything on the radio, or smoke like any homie, headbanger, hesher, or hippie. Instead, they rolled up intense rhymes, hard rock attitude, smoked-out psychedelic production, and Latin swagger into a one-of-a-kind strain on the legendary double-platinum Cypress Hill in 1991. Not to mention, they made history as “the first Latino American hip-hop recording group to go platinum.”

Next up, 1993’s Black Sunday bowed at #1 on the Billboard Top 200, earned a triple-platinum certification, garnered three GRAMMY® Award nominations, and became “the highest Soundscan recording for a rap group at the time.” The platinum Cypress Hill III: Temples of Boom followed in 1995 as 1998’s Cypress Hill IV went gold. In 2000, they merged heavy metal and hip-hop like no other on the platinum Skull & Bones with iconic assists from the likes of Eminem, Deftones, and more. Stoned Raiders [2000] and Til Death Do Us Part [2004] emerged on its heels, while Rise Up [2010] scored a Top 10 debut on the Billboard Top 200. Along the way, they sold over 20 million albums, packed venues around the globe, and embedded themselves in pop culture as immortalized by a star on the Hollywood Walk of Fame in 2019 and getting animated for an episode of The Simpsons. They would also be sampled by everyone from JAY-Z and Black Eyed Peas to A$AP Rocky and Vic Mensa with Chance the Rapper.