We are giving away a pair of tickets to A Bowie Celebration: The David Bowie Alumni Tour @ Revolution Hall on February 17. To win, comment on this post why you’d like to attend. Winner will be drawn and emailed Monday, February 11. 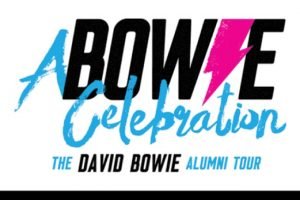 Join key alumni musicians of David Bowie’s bands from across the decades, anchored by his longest standing member Mike Garson along with other amazing Bowie band alumni including Earl Slick, Gerry Leonard, Carmine Rojas and Mark Plati. We’re gearing up to head back on the road with A BOWIE CELEBRATION: The David Bowie Alumni Tour featuring an unforgettable and critically acclaimed evening of Bowie songs with world-class vocalists and an ever rotating mix of hits and deep cuts.

MIKE GARSON
Mike Garson was was David Bowie’s longest and most frequent band member. He was featured on more than 20 Bowie albums, including his much talked about masterly solo on the Aladdin Sane track. Mike performed with David on both his first and last concerts in the United States as well as 1,000 concerts around the globe in between.

EARL SLICK
Earl Slick began his collaboration with David Bowie in 1974 on the Diamond Dogs tour and continued with Bowie through his David Live, Young Americans and Station to Station albums featuring the smash hit singles Fame and Golden Years. Slick rejoined David’s band in 2000 for the Reality album and tour as well as his The Next Day album.

GERRY LEONARD
Gerry Leonard was music director and guitar player for David Bowie on his Reality world tour and DVD along with Bowie’s previous two records, Heathen and Reality and their subsequent tours along with his The Next Day album.

BERNARD FOWLER
Bernard Fowler is a singer and songwriter widely known around the world for his work with The Rolling Stones for more than 30 years. His dynamic vocals have appeared on hundreds of albums for as diverse artists as Herbie Hancock, Ryuichi Sakamoto, John Mayer, Rod Stewart, Robert Plant, Duran Duran, Philip Glass, Bootsy Collins, and many more.

COREY GLOVER
Corey Glover is a founding member of Living Colour and has helped prove that not only could black guys kick out the jams, but that they could be embraced by a vast expanse of fans. Living Colour earned numerous industry awards including back-to-back Grammys for Best Hard Rock Performance and emerged as one of the most influential rock acts of all time: regularly selling out arenas and selling millions of albums.

LEE JOHN
Lee John is a multi-instrumentalist songwriter and producer based out of Los Angeles. In addition to writing and recording his own music, Lee is a member of the band SayReal and just so happens to be the son of Bowie alum Earl Slick.