We are giving away a pair of tickets to DJs Anjali & The Incredible Kid’s 2019 New Year’s Eve Dance Party on December 31. To win, comment on this post why you’d like to attend. Winner will be drawn and emailed Friday, December 28. 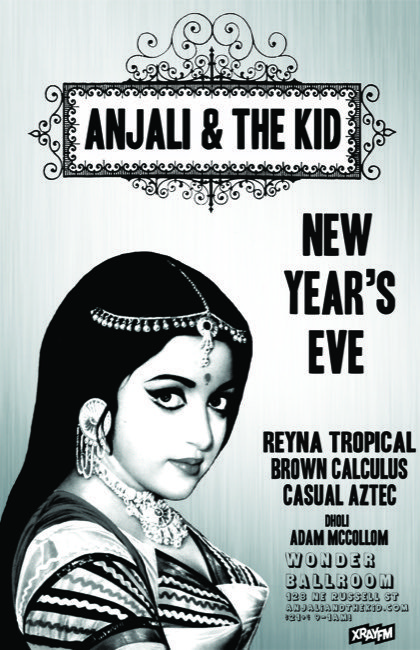 There will also be dance performances from DJ Anjali and her Gulabi Gang troupe.

This party marks the 18th anniversary of Anjali and The Kid playing in Portland clubs as a duo since their New Year’s Eve debut in 2000.

“By pairing bright guitar riffs and meticulously layered samples with lulling lyricism, Reyna and Diaz meld the best of both worlds to create a tropical sound as complex and expansive as their shared experiences of bicultural Latinidad.” – NPR

Mexican Expats based in L.A and Portland, OR, “Reyna Tropical” is Fabi Reyna (She Shreds Magazine/Savíla) and Sumohair. They met for the first time in Nashville Tennesse on behalf of Redbull Music Academy’s Bass Camp at Bonnaroo. They got into the studio the same day they met, recorded a track that would later inspire “Reyna Tropical”. In the nature of experimentation they record each track in one session of improvisation.

Sharing the same body in their past lives, Brown Calculus perform with melanated synergy. Keyboardist and beat maker, Andre Burgos, and singer/songwriter, Vaughn Kimmons, are Geminis, illuminating the sacredness of Black music, seeking to bring about community on Earth and beyond. They explore the soundscapes of the post-soul movement. Revealing the connection between complicated time signatures and Black divinity, with a cosmic sound that remains grounded.

Casual Aztec is an artist and DJ based in Portland and founder of ‘Club Culo’, a JOTX event and curatorial project focusing on international club, neo perreo, trap, dembow, dancehall, reggaeton, and latin house. She has been featured in Vice Magazine, Tom Tom Magazine, and Discogs. She a member of ‘No Control’, a crew of westcoast based women and non binary DJs, producers and promotors.

Seattle based musician Adam McCollom started playing the dhol while living in India in 2003. He’s been the resident dholi at ANDAZ for over a year, hitting the road with Anjali & The Kid to play festivals, concerts-in-the-park & shaadis. His list of former bands is impressive: (Degenerate Art Ensemble (guitar/composer), The Vells (bass), The Pica Beats (keyboards/ piano), Breaks & Swells (bass), Brent Arnold and The Spheres (keyboards/piano), Ghosts Ive met (bass), Ota Prota (guitar/composer), Motherland Ensemble (oud). Since his graduation from Cornish (BFA in Music) where studied Jazz with Julian Priester (of Sun Ra Arkestra) and Hadley Caliman, he has studied Khayal (North Indian classical singing) with Pandit Devashish Dey in Varanasi for a full year as well as the Egyptian Oud & the Arabic Maqam system with Egyptian ethnomusicologist Maurice Roman.

“After 18 years as a duo, DJ Anjali & the Incredible Kid are a Portland institution. It’s difficult to think of a local dance night with a more lovingly crafted mix of Bollywood, urban desi and Indian dance pop.” -Willamette Week 9/19/18

“Maybe the Portland area’s most well-known deejays.” -The Portland Tribune 1/26/12

“People were talking about all weekend: DJ Anjali & The Incredible Kid–playing every, SINGLE day (the only performers to do so), the Portland duo was the must-not-miss Bollywood/bhangra dance party makers of the weekend.” (Sasquatch! Festival 2011) -Oregon Music News 5/31/11

“Celebrate our local heroes as they hold down the biggest rock fest in the Northwest” (Sasquatch! Festival 2011) -The Portland Mercury 5/26/11

“The pair have been keeping Portland dancing for so long in various incarnations, imagining the local music scene without their bhangra and Bollywood rhythms is unthinkable. ” -The Oregonian 5/26/06