We are giving away a pair of tickets to Brandie Posey and Friends @ Curious Comedy Theater on November 5. To win, comment on this post why you’d like to attend. Winner will be drawn and emailed Monday, November 5. 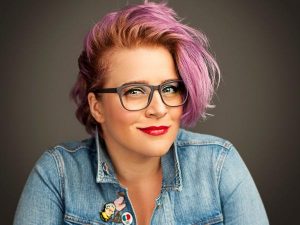 Join Brandie Posey (Lady to Lady Podcast, Comedy Central, All Jane Comedy Festival, Bridgetown) & friends for a night of stand up comedy you’ll never forget. Brandie has been called a “Riot Grrl on Acid” and is a darling of LA’s comedy scene, and for one night only she’s bringing some pals to get Curious.

“On every track of her album there was one amazing joke that was everything you wanted – it was smart & sillier & more twisted but from a genuine place – she reminds me of us.” – Jackie Kashian & Laurie Kilmartin, The Jackie & Laurie Show

“F*cking Phenomenal… Brandie is so cool & so funny… She is an amazing comedian & a quality human being.” – The Nerdist Podcast