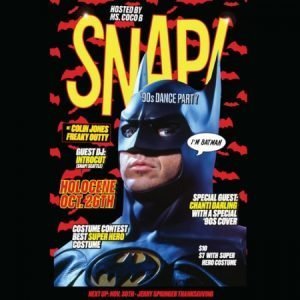 Join the SNAP! 90s crew every LAST FRIDAY at Holocene for a nostalgic trip back to all your favorite music from the early 90s to the early 00’s. Spanning genres from Hip Hop to House to Alt Rock to Modern re-edits you will feel like you are back in Middle school.

THIS MONTH we celebrate HALLOWEEN!

The theme this year is Superheros and course Supervillains are welcome to the party, too! There were so many great Super people of the 90s. Think X-Men, Batman, Captain Planet, Mighty Morphin Power Rangers, and The Teenage Mutant Ninja Turtles just to name a few.

Get $3 off if you come dressed in a Superhero or Supervillain costume. Also get a chance to win a SNAP! Halloween Prize Pack for the RADDEST MOST AWESOME Superhero costume.