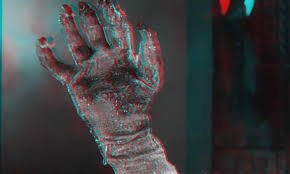 Notable as Canada’s first feature length horror film, The Mask offers an experience of psychedelic terror. The story centers on an ancient mask that, when worn, gives its wearer strange visions of a terrifying world. This disturbing phenomenon takes its toll, however, as continual use of the mask brings devastating consequences. The film utilizes a unique form of audience participation: whenever a character puts on the mask the viewers are instructed to put on their 3D glasses to join in the psychedelic splendor of the mask’s visions. The 3D sequences owe their surreal beauty to the montage artist Slavko Vorkapich, a veteran of Hollywood who is perhaps best remembered as the mentor of Gumby creator, Art Clokey. The Mask is a true cult gem, mixing schlock horror, visual artistry, and an endearing experiment with anaglyph 3D.

Join us for a mystery movie Friday and Saturday night only! One low budget, NYU undergraduate thesis horror film, for your pleasure. ( ͡° ͜ʖ ͡°)