We are giving away a pair of tickets to Pete Holmes Live @ Aladdin Theater on November 2. To win, comment on this post why you’d like to attend. Winner will be drawn and emailed Monday, October 29. 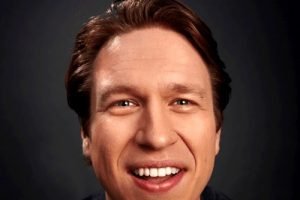 Pete is a nationally touring standup comedian, actor, and writer. His latest special, FACES AND SOUNDS aired on HBO in 2016. Pete’s scripted series, CRASHING premiered on HBO in February 2017 and will return in 2019 for its third season.

Pete previously hosted his own TBS late night talk show, THE PETE HOLMES SHOW, produced by Conan O’Brien. He hosts his own weekly podcast, YOU MADE IT WEIRD. Pete can be heard voicing roles in various animated shows including The Simpsons, Bob’s Burgers, Animals, America Dad!, Ugly Americans and more. Most recently, Pete guest starred on Fox’s Mulaney, Maron, and Kroll Show. His favorite food is lettuce and one of his comedy heroes is Ray Romano.