We are giving away a pair of tickets to The Church Band – Starfish 30th Anniversary Tour @ Aladdin Theater on October 3. To win, comment on this post why you’d like to attend. Winner will be drawn and emailed Monday, October 1. 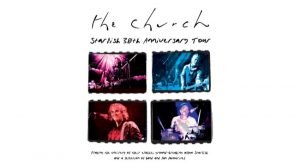 The Church Starfish 30th Anniversary Tour will see The Church play the entirety of their classic, groundbreaking album Starfish and a selection of band and fan favorites.

IT’S A UNIQUE BAND that finds itself cherished as a bona fide legend in the ARIA Hall of Fame while remaining a virtual enigma to the world that knows its name. But maybe that’s no more remarkable than the mystery that continues to unfold within its own ranks.

the church’s accidental signature tune, Under The Milky Way, is like a lighthouse on the brink of a continent forever to be discovered: 25 albums over 35 years and countless diversions that have almost destroyed them a dozen times, yet always reaffirm a mutual commitment to an uncompromising and unparalleled act of creation.

At this stage of the journey, FURTHER/ DEEPER seems both unimaginable and the only option on their endless quest from chaos to resolution. It’s an album of breathtaking new vistas and intense emotions, of sinister black caskets and gorgeous caverns of light, a work born of immense struggle and effortless expression.

“The magic started on day one,” says singer and bass player Steve Kilbey. “Someone strummed a chord or struck a drum or plucked a note and we were off. We wrote and recorded like demons and it was inspiring to feel every member using all his resources in the service of this record.”

Twenty-six songs were born over eight days of exploration in Sydney in late 2013. Guitarist Peter Koppes, recalibrating his personal canvas in the absence of his long-time foil Marty Willson-Piper, drew palpable inspiration from the quartet’s remixed chemistry.

“This new incarnation of the band with Ian Haug has brought a joyous energy to the music we’ve written together,” he says. “The rhythm swings more than usual yet the moods still range from melancholy pop to our modern version of heavy psychedelic rock, as in Laurel Canyon, to the epic gothic-progressive dance track, Globe Spinning.”